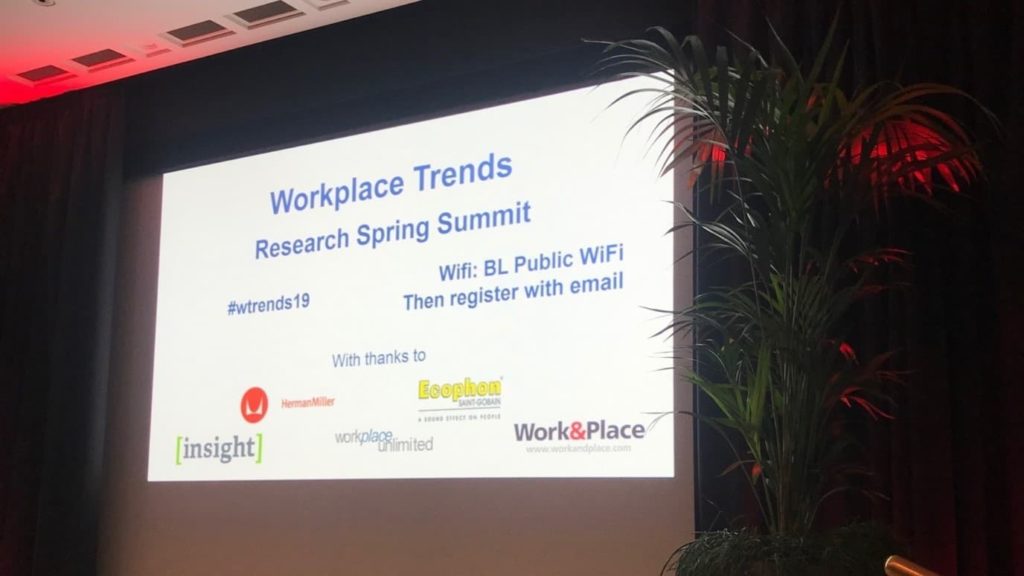 If you haven’t attended before, Workplace Trends looks at the up and coming trends for the next 10-20 years touching on office workspaces, interior design, architecture, human psychology and what it takes to create a great workplace.

Having previously hosted in Copenhagen and New York, last week’s event was based in The British Library in London. A rich variety of speakers explored topics such as wellbeing, productivity, happiness, creativity, biomimicry, activity-based working, open plan layouts and biophilia.

The morning began with a warm welcome from Workplace Trends’ chairman Nigel Oseland of Workplace Unlimited. Introducing the first speaker to the stage, Nigel explained that Rob was going to discuss his view on “An evidence-based approach to workplace management”.

Professor of Organisational Psychology at Queen Mary, University of London and Scientific Director of the Centre for Evidence-Based Management

Evidence-based practice is used in many industries such as medicine, psychology, policing, conservation and education to name just a few, however it’s important that evidence-based research is used to enable more informed decisions, rather than taking the current research as gospel. Rob was a proponent of healthy scepticism, suggesting that it is important people take in to account a variety of information and accept that evidence-based practice is “the conscientious, explicit, judicious use of evidence from multiple sources to increase the likelihood of a favourable outcome”.

Ruth and Michael discussed how their use of virtual reality is used to create psychological tests in workplace design research. Ruth discussed how testing variables using technology can help people make better informed decisions. For example, some of their research has explored “How do environmental changes influence spatial cognition?”, suggesting that egocentric and allocentric frames of reference can help us to map where we fit in to the workplace. One challenge virtual reality presents is the subjective reaction such as nausea and distance comprehension. Future plans include improving VR so that it doesn’t make users feel sick, as well as further research in to the connection between humans and technology.

Nicola and Robin explored a post-occupancy evaluation (POE) one year after it was completed. The project? AECOM’s own London office. The overall study confirmed that through assessments, psychometric tests and wellbeing surveys, the refurbishment had a significant effect on employees; collaboration, creativity and wellbeing all increased. Through studies and hard data, Nicola and Robin agreed that holistic workplace transformation is a worthy investment – as is implementing a staircase to unite four floors!

Julia Ayuso Sanchez – A biophilic case study: How to measure wellbeing and productivity in the workplace

Architect and Project Manager at CBRE Lab in Madrid

Julia explained that in her home country of Spain, only 20% of Spanish offices can be described as agile, collaborative or flexible. In a pilot experiment, Julia was interested in looking at biophilic design and how this can improve workplace performance. One interesting anecdote referenced how culture can play an important part in the acceptance of biophilic design. A group of Japanese workers didn’t warm to their new natural wooden flooring as they’d grown up with an abundance of plastic or synthetic materials, and that the introduction of wood actually provided discomfort due to the unfamiliar smell of wood.

Iva and Matus developed and tested an ‘experience-sampling application’ to measure employee productivity in Bratislava, Slovakia and London. More importantly, Iva and Matus wanted to prove why investing in to a premium office is worth it. The app would ask 4 questions at random points throughout the day and workers would reply anonymously. What was particularly interesting was how space affected employees; how meeting rooms are wasted if they’re used for people taking phone calls rather than having a designated phone area, and that the introduction of designated areas meant workers stopped taking phone calls at their desks which improved office wellbeing due to the lack of colleague distraction.

Head of Workplace at EMCOR

Ian asked, within the workplace how much is too much CO2? And how does temperature and humidity affect employees on a day to day basis? Using a burden of proof scale, Ian went on to discuss a recent study that measured temperature, humidity and CO2, task performance, and data gathered from occupant feedback and online questionnaires. Shockingly, CO2 is the least measured condition at work, and yet it is the thing that affects us the most. Considering humans take 16 breaths per minute, research demonstrated that poor CO2 can significantly affect cognitive function.

Rob Harris, for the motion (Ramidus Consulting) and Katrina Kostic Samen, against the motion (KKS Strategy) in an afternoon debate: “The workplace profession is now just pandering to fads and fancies, and the ‘workplace’ is now done: we’ve run out of meaningful things to say”

In this debate, Rob referenced previous workplace researchers including Frank Duffy and how the discussions surrounding the workplace today are just the same as they were several decades ago. Katrina on the other hand, suggested that the workplace has so much to offer and we can continually learn through new ways of working, new research and new data. When the audience was asked which motion they agreed with, the majority sided with Katrina’s motion against the topic.

Having spent much of the last two years as a Digital Nomad herself, Deborah has been communicating with other Digital Nomads to learn what the workplace needs are for these office-less people across the globe. Deborah spent 12 months living in a different country each month and credits this nomadic work-lifestyle to advances in technology and mobility. Her qualitative study ‘Location Independent’ factored in culture, personality, goals, job role, industry sector and employment status in to what it takes for an individual to become a #DigitalNomad.

Michael Roskams – The relationship between environment, employee wellbeing and productivity

Michael’s PHD research explored the rise of salutogenic design and how the relationship between the physical workplace and workers can influence wellbeing and productivity. A pilot study explored environmental parameters such as noise, air level, temperature, CO2, and was able to pinpoint any offending problems to a particular location which could then be improved.

‘New Ways of Work Crafting’ is an innovative project Suvi and Ursula have been working on that discusses how employees can “align their jobs with their preferences, motives and passions”. One such element was fun; Suvi mentioned a child’s playpool filled with dice that was placed in an office breakout area, and how interesting it was to see workers interact with it – building towers or lining up the numbers in numerical order but talking to each other whilst they ‘played’ with the dice. Through qualitative and quantitative data, Suvi and Ursula were able to explore how employees craft their workspaces, their time and their working habits.

Neil explained how workplace thinking always returns to eight basic laws. He expanded upon these (a brief insight to his sequel to The Elemental Workplace that is due to be released in late 2019). The eight laws Neil touched upon included Flux, Beta, Balance, Purpose, Sequence, Proximity, Culture and Story. He went on to explain how superstructure and infrastructure affect and influence each other, how we need to keep moving upstream and look at the cause and not the effect, and lastly how the next workplace trend might be ‘eudemonic design’ – a focus on fulfilment, human flourishing and prosperity.

The conference was rounded off by Mark Eltringham thanking all speakers and attendees for participating in yet another lively and informative event. Not only was it a pleasure to attend but it was fantastic to offer Huddlebox as a pit-stop for attendees to relax on as they caught up with old friends and met new acquaintances.