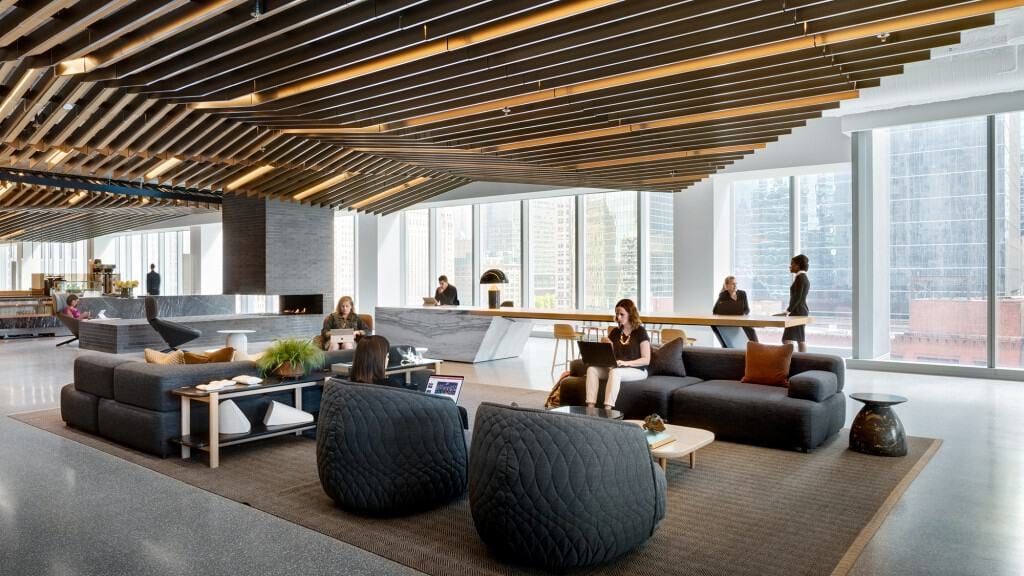 One of the most popular office designs last year was Hyatt Headquarters in Chicago. The building was designed by global architect firm Gensler, who involved teams from both Chicago and San Francisco in the planning and design of the ‘Hub’.

The Hyatt Hub was built in 2017 and is situated above the point where two branches of the Chicago River meet. The intention was to design a building which mimicked the style of the Hyatt hotels and which suggested a strong relationship between the hotels and their headquarters.

The focus was to create an environment that promotes care and nurture for the people who work in it, with the intention that this in turn would encourage Hyatt employees to take care of the guests who stay in the Hyatt hotels.

The architects’ brief was to combine the best of private office spaces with the best of open plan environments, and so there was a need for the Hub to have both privacy and flexibility, and to allow space for meetings and collaborations whilst still encouraging a sense of personal ownership from the employee. The building was to be a hybrid of office working and hotel living, and it is this which makes it so innovative and exciting.

The new space is modelled on the executive hotel experience which Hyatt is famous for, the idea being to give Hyatt’s employees a taste of what their customers experience when staying in a Hyatt hotel. For Hyatt, there are seven ‘touch points’ of the hotel experience, which they have been careful to replicate in the Hub.

The Hub incorporates each of these ‘touch points’ within its design, but the guest rooms have been replaced by ‘work suites’ where teams of between 12 and 20 employees work in pods.

Gensler have striven to ensure that the hotel experience is recognisable and consistent throughout the Hub and have created an office building that not only resembles a hotel, but which is impossible to distinguish from a hotel in everywhere but the working spaces.

The reason why Hyatt was so keen to introduce its employees to the executive hotel experience was because they realised that a lot of their employees didn’t stay in hotels very much, if at all, and so the CEO Mark Hoplamazian wanted to provide a reminder of the type of business that they were working in.

The hotel elements that they’ve incorporated are an expansive arrival hall, which although oversized, has managed to retain a feeling of comfort, even cosiness. There are plenty of seating nooks and the gently undulating ceiling makes anyone using the space feel safe and relaxed.

As with a hotel, the reception area flows nicely into the drinking and dining areas which include a bar and cafeteria which again mimic precisely the feeling of being in a hotel when on a business trip. The cafeteria also has a dual purpose as the menus offered to its employees at The Hub are based on its restaurant menus, and in fact, it may be that in the future new menu items are tested on Hyatt employees before making their way to the hotel menus.

The office suites consist of pod style seating but there are adjacent meet up spaces and also private rooms. There are both small and larger meeting rooms incorporated within the design of the building and many of these have breathtaking views of the Chicago River, again replicating a luxury hotel.

Each floor of offices also has a lounge hub for casual eating, drinking and working and the feeling of hospitality and of relaxed hotel stays permeates the building. The mixed use spaces are typical of a Hyatt hotel and are in keeping with brand identity.

The Hyatt Hub is an interesting building because it forms a hybrid of two design styles which are not usually seen as correlating. The fact that this building is so successful is testimony to the vision of its CEO and board of directors and the execution of the brief by the architects.